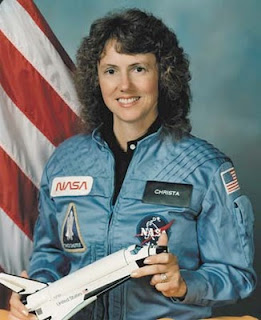 Fly me to the moon –
weightless and astonished.

Teaching –
connecting worlds –
I wave through the window.

An ordinary life
made extraordinary by chance –
one letter out of eleven thousand.
Touching comets from my desk –
I see galaxies.

This week marked the 25-year anniversary of the crash of the space shuttle, Challenger. I wanted to honor the memory of the only teacher on that flight, Christa McAuliffe with this poem.

"Seven astronauts died Jan. 28, 1986, when Challenger was destroyed just after liftoff. It was NASA's first in-flight calamity, and it dealt an especially severe blow to the millions of teachers and students watching on TV to see Christa McAuliffe, a civilian high school teacher from New Hampshire, become NASA's first Teacher in Space." ~Clara Moskowitz (Full article here - http://www.space.com/10708-shuttle-challenger-anniversary-nasa-lessons.html)
Posted by Unknown at 3:13 PM No comments: 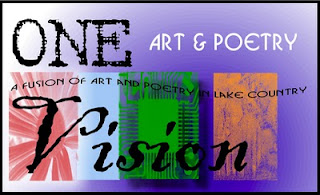 The project One Vision: A Fusion of Art and Poetry in Lake Country, sponsored by the Pewaukee Area Arts Council, will feature a sampling of collaborative artwork and poetry at various Lake Country public library locations in winter 2011. As an arts opportunity for the community, members of the public who missed seeing the poetry reading and art exhibit, hosted by the Oconomowoc Arts Center in October 2010, will be able to enjoy viewing the works of local artists and writers at the following venues: Pewaukee Public Library (starting mid-January), Kettle Moraine High School (starting mid-January), Delafield Public Library (starting February) and Town Hall Library in North Lake (starting March). Artists and poets collaborated to create ekphrastic work, which is a dialogue between two mediums of creative art. The conversation continues with readers and viewers who have the unique opportunity to enjoy this exhibit.

An inspiring experience of art and poetry is at your local public library. For more information about One Vision, please visit the Pewaukee Area Arts Council website: www.pewaukeearts.org.
Posted by Unknown at 2:29 PM No comments: