Several months ago, I had the great honor of having musicians Greg Wilson and Dan Gutwein, of the Virginia-based band Signals, ask if they could use the words from my poem, "When August Becomes a Whisper," to create a song.  My response?  Yes, please!  What poet wouldn't want their words set to music?  This was a very good thing.

Setting poetry to music is no small task, especially when the poem is free verse ~ no rhyme scheme, no meter, no structure except whatever my sub-conscious decided to string out in a long line of images onto paper.

Greg and Dan did an admirable job of making the words fit - bringing new life to this poem, by creating atmosphere through notes, melody and voice.  To listen to "When August Becomes a Whisper," just click HERE, to visit their Reverbnation page (Signals1234).

I thought my readers would enjoy learning more about the inspiration, not just for this song, but the core of what helps songwriters create from the source of their own musical beginnings.  Below is a short interview session that I was fortunate to have with lead vocalist and guitarist, Greg Wilson from Signals.  Sit back, open up your mind to the land of musical influences and enjoy! 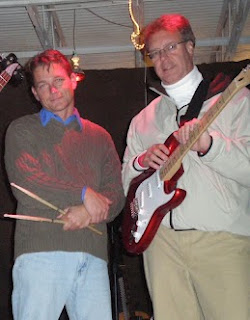 Bio: “When the silent road meets the broken bridge up and down 81 and west on 429 there will be the signals straining to stretch the bounderies of the limitless universe.”